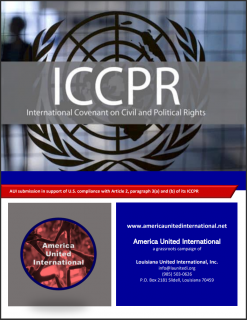 Presently, it is undisputed that America lacks effective redress for persecution and psychological torture imposed through abuse of America's legal system facilitated by unethical U.S. judges. America United International (AUI) contends that the U.S. judiciary is a black-robed hit squad to an intolerable extent as a result. Today, AUI submits to Congress compelling arguments if not conclusive proof that U.S. court racketeering has precipitated a human rights crisis.
SLIDELL, La. - LouisEagle -- To some, the campaign seems complex, but according to its administrators, the ultimate point of it is relatively simple: Short of re-writing our national constitution, judicial power cannot be expanded to encompass the role of unethical U.S. judges in persecuting targeted Americans and non-citizen U.S. residents through persistent abuse of America's legal system.

The campaign is known as America United International (AUI), and today it makes that point among others in a 7-page submission to the U.S. Senate Foreign Relations Committee (SFRC) as well as the U.S. House Judiciary Committee (HJC).

"Our latest resort to the SFRC and HJC follows the last four years or so of us addressing related human rights concerns with the White House, its Department of Justice, and the U.S. State Department" says Dr. Zena Crenshaw-Logal, AUI's Chief of Operations. "During that time we confirmed through U.N. procedures and the U.S. acknowledged that it lacks effective redress for persecution and psychological torture imposed through abuse of America's legal system facilitated by unethical U.S. judges and quasi-judicial administrative officers", she adds. "The point it seems U.S. public officials don't get", Crenshaw-Logal asserts, "is indulging that judicial oversight deficiency is not a use — it's an abuse of America's sovereign power. When U.S. judges and quasi-judicial administrative officers deliberately violate rights of disfavored people or entities with virtual impunity, naturally, they are empowered to do so. AUI's many constituents attest that a 'black-robed hit squad' is what America's judiciary has become to an intolerable extent as a result."

More on louiseagle.com
Belinda Parker-Brown is co-founder and CEO of Louisiana United International, Inc., the nonprofit corporate sponsor of AUI. Parker-Brown is a globally acclaimed, grassroots community organizer and explains, "folks think what's at hand is politics as usual. America supposedly does what it wants and no grassroots organization — not even the United Nations can 'make' it do otherwise according to folklore. But the corruption AUI combats is NOT about America protecting corrupt law enforcement officers, court clerks, private lawyers, public defenders, prosecutors, and judges (including quasi-judicial officers) . . . all in cahoots to violate rights. It is individuals we combat who perhaps under color of law, by-stand (or worse) to weaponizations of America's legal system. That's not government. It's likely a variety of criminal acts by mere criminals."

Both Crenshaw-Logal and Parker-Brown agree: "AUI's efforts to trigger U.S. compliance with relevant provisions of its International Covenant on Civil and Political Rights (ICCPR) continuously affirm that the metaphorical Emperor of judicial oversight in America has no clothes. Fortunately, prison garb is readily available for suborning ineffective redress of judicial corruption and court racketeering in America. The ICCPR includes one of America's most explicit pledges to provide effective redress for human rights violations by rogue U.S. government agents. And, believe it or not, in response to AUI plus the plight of its constituents, America as a nation lacks sovereign power to disregard that pledge."