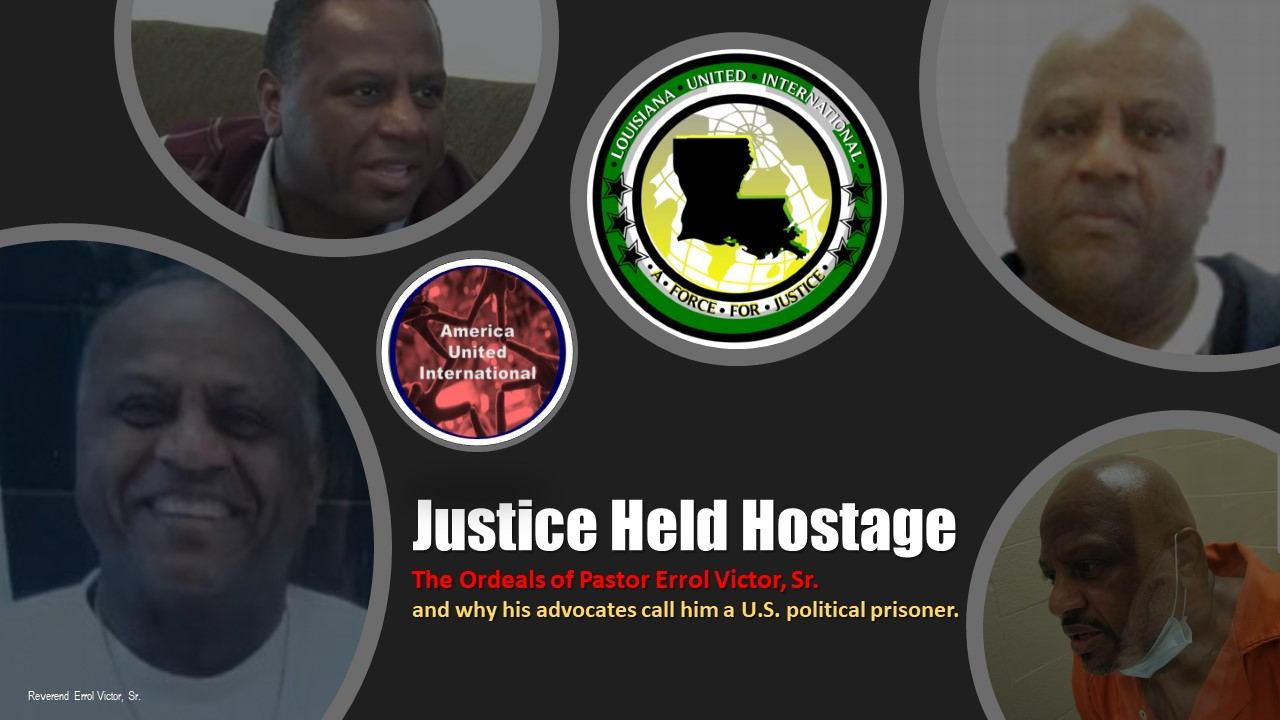 Advocates contend that the State of Louisiana lacks jurisdiction to retry Errol Victor, Sr. for allegedly killing his eight (8) year old stepson and that from the beginning his prosecution has been vindictive, fueled by racial animus, and conducted by illegal means including collusion with one or more judicial officers to deliberately thwart proof of his actual innocence. A live press conference will be held at the courthouse on the first scheduled day of trial.
SLIDELL, La. - LouisEagle -- Errol Victor, Sr., a Louisiana minister having maintained his innocence since being arrested in April 2008 for allegedly beating to death his then eight (8) year old stepson, M.L. Lloyd III, is scheduled for re-trial on related second degree murder charges on Monday – July 11, 2022.  A non-unanimous jury convicted Victor of the crime in August 2014. That verdict was invalidated by the U.S. Supreme Court on August 27, 2020 following its landmark decision in Ramos v. the State of Louisiana, 590 U.S. _____ (2020). According to the Ramos Court, the State of Louisiana deliberately resorted to non-unanimous juries to dilute the influence of African American jurors, and supported that vestige of the Jim Crow Era for centuries.

Once again, Victor, an African American, will be tried for second degree murder before the 40th Judicial District Court for the Parish of St. John the Baptist in the State of Louisiana, Division "B", this time with Judge Dennis Waldron presiding. Louisiana United International, Inc. (LUI), a membership-based civil, constitutional, and human rights organization, recently teamed with the private consulting firm, Brown Vindicators (BV), to provide crisis management for Reverend Victor, a long-time LUI member. The advocates contend that Judge Waldron lacks jurisdiction to retry Victor and that from the beginning, well before Waldron was assigned the case, Victor's prosecution has been vindictive, fueled by racial animus, and conducted unscrupulously. LUI is finalizing legal action to halt and preclude retrial of Victor by the State of Louisiana on any charges stemming from M.L.'s death.

More on louiseagle.com
An expertise of LUI and the primary focus of BV's crises management is addressing organized, persistent abuse of America's legal system facilitated by unchecked judicial misconduct as an international human rights matter. Belinda Parker-Brown, LUI's Co-Founder and CEO, with BV Founding Co-Principal, Dr. Zena Crenshaw-Logal, submitted a complaint today to the U.N. Human Rights Council with attachment contending that Errol Victor, Sr. represents a very large segment of America's formerly and currently incarcerated population. The class is of Americans subjected to vindictive prosecutions on constitutionally prohibited grounds, effectuated by illegal means including collusion with one or more judicial officers to deliberately thwart proof of the referenced victims' actual innocence. Following LUI's lead, a multi-discipline team has been assembled and is growing to contend with this phenomenon which both LUI and BV are treating as the core of Reverend Victor's more than decade long legal crisis.

According to the referenced U.N. communication, America " . . . persists in extending impunity to its judges, justices, and quasi-judicial officers for their roles in facilitating . . . USA legal system abuses. As a result, Victor and surely many if not most of the more than 2 million people comprising America's incarcerated population are political prisoners, i.e., their human rights and fundamental freedoms are essentially hostages to or of this de facto government policy; it is the politics of judicial oversight in America."

Parker-Brown and Crenshaw-Logal acknowledge that their U.N. complaint is "not a product of thorough government investigation" and explain that such an investigation ". . . would be part of effectively redressing the kind of collusion (our) communication endeavors to describe" then add, "(d)ramatically expanding judicial oversight in that way seems like something America is willing to undertake about as much as the State of Louisiana seems intent on fairly resolving criminal charges against Reverend Victor." Reportedly, "(a)s leaders of America United International (AUI), the Complainants will continue interacting with AUI constituents, encouraging them to document their relevant difficulties." Parker-Brown and Crenshaw-Logal also vow to ". . . keep reaching out to U.S. public officials to lawfully evoke the country's compliance with its International Covenant on Civil and Political Rights (ICCPR)." They explain, "that human rights treaty mandates effective avenues of redress for deliberate human rights violations perpetrated by rogue government agents. According to the International Commission of Jurists, for a nation's avenues of redressing human rights violations to be effective, they 'must be prompt, accessible, available before an independent body, and lead to reparation and, where applicable, to cessation of the wrongdoing'."